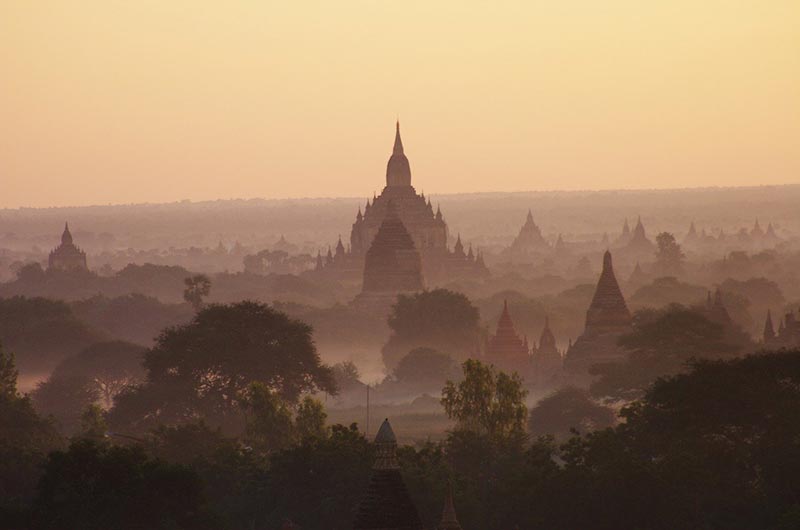 Bagan was once the political and cultural centre of the Pagan Empire, a people who ruled the areas around the Irrawaddy River from the 10th to 13th centuries. The temples in Bagan that remain are part of ten thousand built across the plains. They are now under the protection of Bagan Archaeological Zone, a 10km square area within and just outside the old city.

Myanmar is proud of this incredibly important cultural location, truly a jewel of South-East Asia. The number of Stupas and temples in Bagan is, of course, staggering but so are the intricacies, the level of preservation, and the artistry.

To explore this enchanting part of the world, stay in the local town of Nyaung-U and either book a guided tour or, if you’re feeling adventurous, hire a bike and peddle your way into history along the dusty paths between each temple.

EXPLORE THE BEST TEMPLES IN BAGAN

The name Shwezigon Paya can be translated as ‘golden sandbank’ and this shimmering golden pagoda is a jaw-dropping structure of great beauty.

It was built in the middle of the 11th century by Buddhist convert King Anawratha of Bagan.

The ancient holy men of Shwezigon Temple are credited as being responsible for bringing together the two sides of Buddhism, it has been a symbol of peace ever since.

I was stunned by this incredible place, a temple that has been glowing in the sun for millennia, there is something wonderful and humbling about that.

Dhammayangyi Temple is the largest on the Bagan plain. The red stone brick edifice is impressive and beautifully decorated, but it was never completed and has sadly not benefitted from any restoration projects.

The temple can be dated back to the 12th century thanks to inscriptions from one of the original benefactors, a princess who donated slaves who could dance and sing, a garden, and fertile farming land.

Dhammayangyi is loved by archaeologists because of the mystery surrounding the temple’s interior. Some of the chambers were permanently sealed at the point of construction and no-one has been able to discover why.

Shwesandaw Pagoda is one of the most prominent of all the temples in Bagan. It sits higher than the others and so can be seen rising impressively into the sky from far away on the plain.

Shwesandaw is a stupa and so sits outside the city walls to provide spiritual protection for the city. It was built by King Anawrahta, the creator of the kingdom of Bagan, in 1057 to provide a sacred home for the hair of the deceased Gautama Buddha.

This red and white 11th-century pagoda has suffered damage throughout the years, it doesn’t help that it is one of the few that visitors are allowed to climb up.

It is no longer classically beautiful, but for me, it symbolises the ability for religions to exist in harmony with each other. Each terrace of this Buddhist monument is decorated with Hindu deities such as Ganesh.

‘Thatbyinnyu Phaya’ is one of the highest of all the Bagan temples which suits the fact that its name means the Omniscience of Buddha.

It was built between the years 1113 and 1163 by King Alaungsithu and is one of the first two-storey temple to be built.

The design of ‘Thatbyinnyu’ is magnificent with the tapering roof and towers creating a ‘soaring into the sky’ effect. Standing on the terraces looking out at an awe-inspiring vista is humbling. You can temples dotted throughout the landscape, the Ayeyarwaddy River, and distant hills.

‘Sulamani’ means ‘Small Ruby’ and that suits the beautiful warm red hues of this elaborate temple. It was built later than many of the other stupas and temples by Sithu II, an inconsistent ruler who felt he needed to appease Buddha.

Sulamani Temple was also used as a centre for education, so there are a vast number of smaller buildings to explore.

It’s a wonderfully preserved building that joyfully displays many of its original features. In particular, the interior stuccos are fascinating, they tell the story of the battles between dark and light with carvings depicting both great subliminal beauty and unsettling horrors. It was a relief to pop back out into the air and sunshine after losing myself in the artistry.

Ananda was built when the country was first re-unified, it was designed to reflect that. Four Buddhas stand facing north, south, east, and west, and to get to them the devotee must journey through a separate porch and meet other pilgrims at the centre of the building, thus bringing separate beliefs together in peace.

Book ahead for your Bagan trip

Book a tour of Bagan 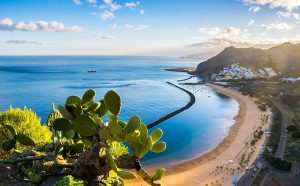